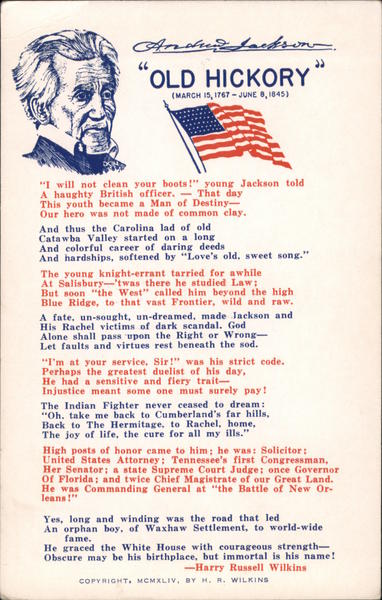 Front:
حمامی “OLD HICKORY" (MARCH 15, 1767 - JUNE 8,1845) “I will not clean your boots !” young Jackson told A haughty British officer. - That day This youth became a Man of Destiny- Our hero was not made of common clay. And thus the Carolina lad of old Catawba Valley started on a long And colorful career of daring deeds And hardships, softened by “Love's old, sweet song. The young knight-errant tarried for awhile At Salisbury-'twas there he studied Law; But soon "the West” called him beyond the high Blue Ridge, to that vast Frontier, wild and raw. A fate, un-sought, un-dreamed, made Jackson and His Rachel victims of dark scandal. God Alone shall pass upon the Right or Wrong- Let faults and virtues rest beneath the sod. “I'm at your service, Sir!” was his strict code. Perhaps the greatest duelist of his day, He had a sensitive and fiery trait- Injustice meant some one must surely pay! The Indian Fighter never ceased to dream: “Oh, take me back to Cumberland's far hills, Back to The Hermitage, to Rachel, home, The joy of life, the cure for all my ills.' High posts of honor came to him; he was: Solicitor; United States Attorney; Tennessee's first Congressman, Her Senator; a state Supreme Court Judge; once Governor Of Florida; and twice Chief Magistrate of our Great Land. He was commanding General at “the Battle of New Or- leans!” Yes, long and winding was the road that led An orphan boy, of Waxhaw Settlement, to world-wide fame. He graced the White House with courageous strength Obscure may be his birthplace, but immortal is his name! -Harry Russell Wilkins COPYRIGHT, MCMXLIV, BY H. R. WILKINS

Back:
A Souvenir of Washington, D. C. POST CARD PLACE STAMP HERE THIS SPACE FOR ADDRESS ONLY General Andrew Jackson, “Old Hickory,” the Commanding Officer of the victorious American troops at "the Battle of New Orleans,” Jan. 8, 1815, later became the seventh President of the United States, 1829-1837. Andrew Jackson was one of the most picturesque and colorful characters in American history. _COPYRIGHT, MCMXLIV, BY H. R. WILKINS, SPARTANBURG, S. C..