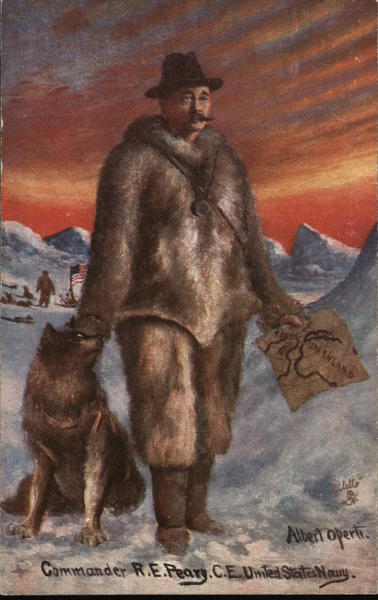 Back:
QU TUCKS POST CARD Raphas Herse| CARTE POSTA LE ORO POSTKARTE By Appointmeni. TRADE MARK COMMANDER PEARY, whose name will be associated with the discovery of the North Pole as long as the world exists, was born at Crisson Springs, Pennsy lvania, May 6, 1856, and entered the U.S. Navy in 1881. In 1886 he began those intrepid explorations of the Arctic Regions, which have made his name a household word throughout the world. He has undertaken no less than eignt voyages in these ice- bound regions, arriving as far North as 87 degrees on his seventh voyage-1903-6. This portrait of the great explorer is absolutely authentic, having been painted in the Arctic Regions by Albert Operti, the official artist attached to this expedition. Commander Peary has now, however, eclipsed all his previous attainments by at last reaching his life's goal, the North Pole, on April 6, 1909. (FOR ADDRESSS ONLY.) Printed in Englana "COMMANDER PEARY AT THE NORTH POLE "OILETTE" Postcard 9787 66 Raphael Tuck & Sons ART PUBLISHERS TO THEIR MAJEST! THE KING & QUEEN