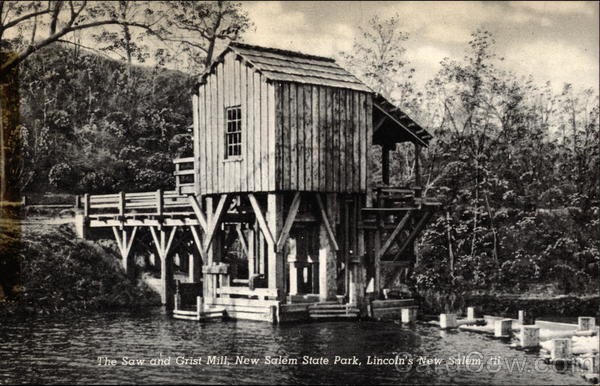 Back:
THE SAW AND GRIST MILL The original mill was erected in 1829, by James Rutledge and James Camron, a year after Camron had entered the eighty acres on which the village stands. Believing the mill would attract trade, they had the land ; plotted out into town lots and blocks. The new mill is on the original site but owing to the river changing its channel a mill pond furnishes the water for the mill. It was on the old mill dam that Lincoln stranded his river flatboat, thus introducing him to New Salem which became his home for six years. New Salem State Park is located near Petersburg on Highways 97 and 123, about 17 miles northwest of Springfield, Illinois. 6 B150-N IRA E OWEN, THE WAGON WHEEL INN, PETERSBURG, ILL.